New work on vertical heterophoria has dramatically advanced both our understanding of the condition and our ability to treat it. 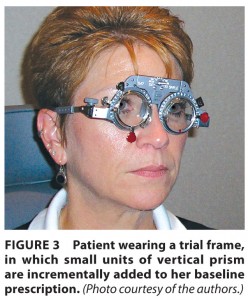 In 2006, Penelope, a fabrics engineer, was critically injured in a car accident in which she suffered a significant traumatic brain injury. One year into her recovery, she continued to experience a myriad of symptoms, including headache, dizziness, nausea, neck pain, eye strain, fatigue, and anxiety. She found it difficult to walk or drive; she also had trouble focusing, reading, and writing. The worst, however, was that the symptoms did not improve, even though Penelope received the full range of treatments typically given to patients with traumatic brain injury.

By the time Penelope was referred to us in 2008, she had been through speech therapy, occupational therapy, physical therapy, and even vision therapy without gaining more than marginal relief from her symptoms. She received a comprehensive vision evaluation, was diagnosed with vertical heterophoria, and was prescribed vertically realigning prismatic spectacle lenses. In a matter of days, her symptoms were markedly reduced. Within one week, her occupational therapist and neuropsychologist noted significant improvements.

At this point, we have seen more than 1,000 patients similar to Penelope. What these cases have in common is a history of brain injury, a complex group of symptoms, and minimal improvement to multiple treatment modalities. These cases also share one other thing: successful treatment with vertically realigning prismatic lenses. All of these patients had vertical heterophoria, which we now know can produce a wide range of symptoms. 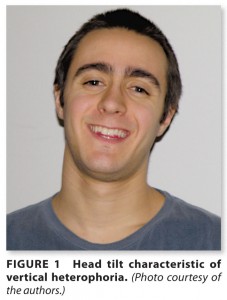 A form of binocular vision dysfunction, vertical heterophoria is a visual condition in which the line of sight from one eye is higher than the line of sight from the other eye when at physiologic rest (an ocular posture created by disrupting fusion with a Maddox Rod or prism). Due to this alignment challenge, patients with vertical heterophoria have marked difficulty maintaining a binocular image. Two compensatory mechanisms employed by these patients to facilitate fusion include the overuse of the elevator and depressor extraocular muscles and the tilting of the head (Figure 1). The extraocular muscle overuse leads to strain and fatigue, which causes many of their other symptoms. The head tilt leads to chronic neck pain.

Although vertical heterophoria was first described in the 19th century, the medical literature has had very little to say about it since then.1 More than a century ago, G.T. Stevens claimed to have successfully treated vertical heterophoria with surgical intervention (extraocular muscle tenotomy), but his results have not been reproducible.

In the 1950s, Raymond Roy, OD, successfully diagnosed and treated vertical heterophoria using prolonged monocular occlusion to delineate the direction of vertical misalignment. He utilized much smaller than standard units of prism in his spectacle lens prescriptions.2 Since then, very little research has been published on vertical heterophoria.

Does this sound like you?
Take the Test!
Read our FAQ’s
Published academic articles