A Bloomfield eye specialist who prescribes special lenses to help solve long-standing headache and dizziness problems in her patients is gaining attention and referrals rarely given to optometrists.

The eye problem, known to specialists as Binocular Vision Dysfunction, occurs when a person’s eyes aren’t perfectly aligned, or balanced. Sometimes one eye is physically higher than the other.

During the past twenty years, Dr. Debby Feinberg has treated 7500 people at Vision Specialists of Michigan for the problem. Many had gone undiagnosed for eight to 12 years despite going from doctor to doctor, she says.
They live with double vision, light-headedness, severe headaches, sinus problems, nausea, poor depth perception, unsteadiness while walking, light sensitivity, neck and shoulder discomfort from twisting their bodies to focus, reading problems, car sickness and anxiety in large spaces like malls.
Some people develop agoraphobia, fear of open or public places, because they get wobbly and nauseous outside their homes, Feinberg says. Binocular Vision Dysfunction may run in families or be caused by trauma to the head, and it increases with age, she says.
“I had no idea there were so many dizzy people in the world until I started asking about it,” says Feinberg, who has developed an extensive questionnaire to help diagnose patients, along with a battery of eye tests. Her eye exams take an hour, sometimes two.
The fix often is a simple prism lens added to eyeglasses that helps eyes see images at the same level. It’s an inexpensive solution, but finding the exact correction can take months because a person’s eye muscles often need to adjust after years of overcompensating.
Insurance may cover the exam, although some plans don’t pay for eyeglasses.

An unusual invitation
In September, 2005, Feinberg and her brother-in-law, Dr. Arthur Rosner, an otolaryngologist at Beaumont Hospitals in Royal Oak and Troy, presented their findings to the annual meeting of the American Academy of Otolaryngology in Los Angeles. It’s rare for an optometrist to address leading ear, nose and throat specialists.

Often, patients seek out otolaryngologists, or ear, nose and throat specialists, for dizziness problems because those problems can be caused by inner-ear imbalances.

Rosner predicts it will take a decade for eye and other specialists to recognize the problem and begin treating it. He wants to further study the link between an inner-ear problem that causes dizziness known as benign positional paroxysmal vertigo (BPPV) and Binocular Vision Dysfunction. He theorizes that the way people tilt their heads to see may cause inner-ear imbalances that need correction. In some people, he says, “it’s not just an eye disorder but an ear disorder — and they’re related.”

Feinberg became interested in the issue in optometry school when she saw a patient with the problem. Later, she joined the optometry practice of her father, Dr. Paul Feinberg. He had been told in optometry school five decades ago that doctors shouldn’t bother with vertical eye disparities of less than one unit, or diopter.

But as he began seeing more patients who described symptoms like imbalance and dizziness, he began to appreciate that measurements for vertical imbalance were as important as horizontal measurements.

Another chance finding came in 1995, when Debby Feinberg was riding in the car with Rosner and noticed him holding a prism, a type of lens that shifts the image from an object up or down. Another doctor had given him the lens in medical school after hearing him describe some of his visual symptoms.

During the next six months, Feinberg fitted Rosner with prism lenses in his glasses, and the headaches, double vision and depth perception problems he had lived with since childhood disappeared, he says.

“I walked into parking meters, signs and doorposts, kind of like Mr. Magoo,” the cartoon character, he says. He shied away from reading and fared poorly in sports like baseball as a child, he says. He compensated in medical school by becoming an adept listener.

Patient reports impressive
In 2004, Rosner and Debby Feinberg decided they needed to educate more of their colleagues about their findings, and they knew they’d need proof to convince them.

They surveyed 100 of Rosner’s Royal Oak Beaumont ear, nose and throat patients last year. From those, they got meaningful data from 40, 29 of whom had vision-related problems. Prism lenses helped 90% of them reduce their symptoms, Rosner says. These are the findings he and Feinberg introduced in Los Angeles at the national meeting.

One of those in attendance in L.A. was Dr. Akira Tajiri, a Reedley, Calif., optometrist who had spent 50 years understanding Binocular Vision Dysfunction. He and Feinberg had never met, though they had talked and e-mailed each other for several years. Feinberg found him when she asked a California prism lens manufacturer whether any other doctors order the lenses. The company pointed her to him, and he became her guru, she says.

Tajiri has devised a simple patch test to help diagnose the problem. Patients wear an eye patch over one eye for two days and two nights, then wear a patch over their other eye. The treatment helps the eyes adjust to a comfortable position, so he can measure their vision, he says during a telephone interview.

His Web site, reedleyeyecare.com, has a section on the condition and a pamphlet patients can download. He agrees with Paul Feinberg that eye specialists usually ignore vertical misalignments unless they appear substantial. Most patients have a difference of as little as three-fourths of a prism diopter, he says.

He compares the problem to balancing a tire. “Almost every tire is not perfectly aligned when it comes out of the factory,” he says. “If you put a little lead in the tire, to balance the tire, it corrects the problem. The eyes work without balancing properly, but they work a heck of a lot better when they are.”

In retinal rivalry, as the problem also is known, “one eye tends to look higher than the other,” he says. Once he prescribes prism lenses, patients’ reading comprehension improves and they aren’t “tired and grumpy at the end of the day” from straining to see.

‘A lifesaving thing’
Feinberg diagnosed Binocular Vision Dysfunction in Leonard Lewis, after he had a series of blackout spells and dizziness. He also had trouble keeping food down and couldn’t drive a forklift for his job inspecting steel at Worthington Steel in Taylor.

After one blackout, he was hospitalized and underwent numerous tests, which revealed nothing. Then his primary care doctor told him to see Feinberg. He recalls him saying: “I know this sounds kind of wacky and you might think this is out there, but I want you to see her.”

Lewis walked into the office, and Feinberg immediately looked at him and said: “I know exactly what’s wrong with you,” he recalls. She held a ruler up to his eyes and found one higher than the other. Then she held a prism up to his eyeglasses and asked him to pick up something off the floor. He picked it up easily. Then she asked him to take off his glasses and she dropped a pen. When he went to pick it up, he almost fell backwards, but she was there to catch him, he says.

Lewis’ new glasses have eliminated the headaches and dizziness. He’s returned to bike riding and walking with his wife. “It was a lifesaving thing, in my opinion,” he says.

Becky Stemen, of Port Huron, spent more than a year seeing specialists, taking numerous drugs and undergoing exhaustive tests, including a CT scan and magnetic resonance imaging (MRI), for a possible brain tumor. None was found. She tested normal on other exams. Then, one day, she developed dizziness driving home from work. “I felt the earth just starting moving and I wasn’t,” says Stemen, a pastry chef at Pronto restaurant in Royal Oak.

“It was a rough year. It was no way to live,” she recalls.

When specialists couldn’t find anything, she was referred to a psychiatrist, who prescribed antidepressants. There’s a condition called psychogenic dizziness — imaginary feelings of imbalance — that indeed may be Binocular Vision Dysfunction, Feinberg says.

An otolaryngologist told Stemen about Debby Feinberg with some disbelief.

“He said he didn’t know if she was a quack, but he thought her findings were interesting,” Stemen recalls. Three months later, when she returned to see him, he told her he had dropped his misgivings about Feinberg because she had helped several of his patients.

Some patients like Stemen take months to find the correct prescription because their eye muscles need time to adjust to the prism lenses after years of straining. Her first prescription eliminated her headaches and helped her see images more clearly, “about 90 percent of my problem,” she says. But she found that when she was stressed or at the end of her day, some problems returned.

“I felt I needed a tune-up,” she said, to Feinberg’s elation. Feinberg relies on patients to fine-tune prescriptions.

“When there’s tension between the eyes, there’s sometimes a different prescription over time,” says Feinberg. It’s known to eye specialists as a latent prescription. Remeasuring — and sometimes adjusting prism lenses a tad — can help find “the hidden prescription,” she says.

Stemen got a minor adjustment in her right prism lens when she saw Feinberg again. It was small, and the larger prism adjustments typically stocked by eye specialists wouldn’t have helped.

“What’s so exciting is that the patients are very exacting,” Feinberg says. “We are partners. They have half the answers, and I have the other half.”

Stemen is such a convert that she takes Feinberg’s business cards at each appointment and distributes them to people she meets.

Woman with a mission
“It’s heartwarming to help people,” says Feinberg, a working mother who expanded her hours because she could “no longer stand the suffering” she saw in her patients.

“I’m convinced I must train and educate others. I can’t keep it a secret anymore.”

Feinberg has developed brochures available on her Web site, www.vision-specialists.com, and hopes to write a book on Binocular Vision Dysfunction and issues related to it.

She’s equally passionate about testing children for far-sightedness, or near-vision seeing. It’s often missed because many pediatricians test vision only by asking children to use an eye chart on a wall, she says. She’s intrigued by reports she’s heard about in the media linking juvenile delinquency to problems children have reading up close.

A $4 “near point card” that measures reading vision provides more answers, she says. “That’s my next project.” 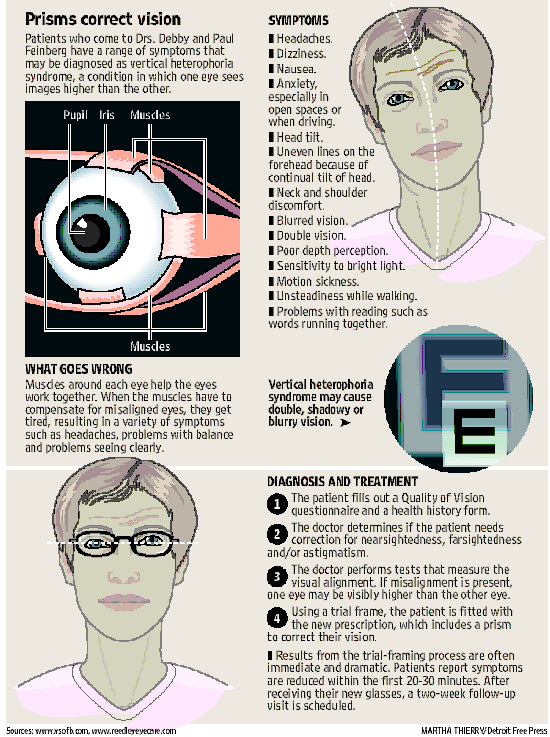 This is just spacer text