STORE HAS AN EYE ON RECYCLING FOR CHARITY

They stack up on top of each other in a frayed cardboard collection box with a handwritten sign that reads, “We Recycle Your Old Glasses.” The box sits on the front desk at Vision Specialists of Birmingham against a backdrop of state-of-the-art eyewear. 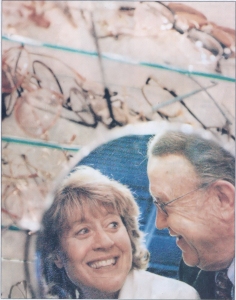 Customers, or those who’ve heard through word of mouth that the shop donates eyeglasses to the local chapter of an international charity, drop off pairs at their leisure. When the donated glasses begin to pile up, they are stored in boxes in the basement of the shop’s owner, Debby Feinberg. Every year or so, they are handed over by Feinberg, a 48-year-old optometrist and mother of two, and her father, Paul Feinberg, a spry 80-year-old optometrist, to the local chapter of Lions Club International. The charity combats vision impairment, blindness, drug abuse and diabetes. This ritual took place again earlier this month, when the Feinbergs donated more than 2,000 used eyeglasses to the club. The donation was their largest ever. The club will turn the glasses over to a distribution center in Indiana in the coming weeks.

“We just put a sign up, and ever since, we’ve been a depot,” said Paul Feinberg, who lives in Bloomfield Hills. “Debby deserves all the credit.” His daughter said, “I never imagined we would have collected as many eyeglasses as we are.” And yet, “it’s a quiet thing,” she said, alluding to the fact that her father doesn’t like to make a big deal of it. She went into practice with her father 23 years ago, but he started donating to the club
seven years before that from his own practice.

Largest donation
Before helping load a fellow club member’s van with several boxes of donated eyeglasses, Margaret Jasica, president of the Birmingham Lions Club and a longtime Birmingham resident, said the Feinbergs’ donation was the largest the charity had ever received. There was no formal ceremony, though Paul Feinberg was beaming in a blue blazer, loose slacks and a striped tie.

This is just spacer text